Please check my latest blog post at my employer’s site about best practices in OBIEE visualizations.

I think that certain OBIEE implementations never deviate from the default look and feel – and sometimes it is possible to improve user experience by doing certain things (such as creating index dashboard with links to other content, similar how it’s done in the Sample Apps).

Symptoms
When running an Oracle Business Intelligence Enterprise Edition (OBIEE) Dashboard with multi-select prompts that contain many values, the values in the list are not consistently alpha-numerically sorted.

Bug 8995183 – SORTING IN MULTISELECT PROMPT NOT WORKING AS EXPECTED
Bug 9787610, MULTISELECT PROMPT NOT SORTING PROPERLY WHEN CONTAINS MORE THAN 256 ITEMS
Solution
This issue is fixed in OBIEE 10.1.3.4.2.
If you are encountering this issue, you are urged to upgrade to version 10.1.3.4.2 to obtain the fix
for this bug and many other bugs.
For information on upgrading to this version, please see Note 1357872.1 How To Upgrade to
Oracle Business Intelligence Enterprise Edition (OBIEE) 10.1.3.4.2

2.    Follow instructions for installing the patch as described in patch readme.txt file.
Oracle Support recommends that you first test this patch on a development or test server.
Once you are satisfied that the patch corrects the issue, you may promote the patch to
your production environment.

NOTE: If you are using any web server other than IIS, you will need to recreate and redeploy the
Analytics.war file after installing the patch.

For detailed instructions on how to do this in an OC4J environment, please see:

Today I want to discuss the multi-select prompt below. You should recognize this one easily – since most of you work with this quite frequently. Ta-da:

What’s wrong with it, can you ask me?

Well, the major one – I and many of the clients complained about when I worked for them – believe that it’s counter-intuitive to drag from right to the left. At least in Western culture (USA, Europe, Latin America), it’s been accepted that information is read from left to right. I won’t get into much details, but in most software that I use on a daily basis, such functionality works the other way than implemented in OBIEE – you drag from left to right. This is the biggest issue, which I hope Oracle’s developers would fix in 11g (if they don’t, I know it’s not their fault).

Second problem, you need to click Go button in order to get results. In this age of web 2.0, AJAX, etc. – it would be relatively easy to start outputting results once you start typing. I agree, this isn’t a bug per se, rather an interface issues. However, users now need to spend more time in the multi-select  – instead of going straight to the data.

Third issue, 1-column positioning of data in the select window. There’s so much white space, that it could be spent better. I don’t think quality software should leave doubts in its user interface. There’s no doubt that it’s not a show stopper, but again, those little things might attribute to better acceptance by potential clients.

Finally, OK and cancel buttons should be positioned in the center. I’m not claiming to be a design and usability expert, but I observed people spending time trying to figure out what to do next, or worse, clicking on Cancel – subconsciously.

OBIEE’s Multi-select has been a source of frustration, anger, and complains from my users.

I always addressed this as a training issue, and I still hope for a fix.

P.S. while writing this I thought – “Is it possible to re-work the box?”…technically, that shouldn’t be difficult – script responsible for it is here: res/b_mozilla/prompts/gfpmultiselect.js  By some java-script re-arranging – it should be possible to “reverse” boxes. Problem with that is it would constitute a major code change and loss of Oracle support, and possibly infringing on the license.

Just by looking at script – it seems as nothing have changed since 2002. Also, it would be nice to have a feature of designing own UI (such as using skins, templates, radio-buttons, other interface elements).

I just realized that this post is inspired by Venkat.

I’m finally posting a solution to the problem I’ve identified a while ago related to a specific Pivot Table View. I think the final outcome should look something like this image:

To get this result – I’ve used the “New calculated column” menu on the pivot table (circled in red):

Then, what you really need to have in the Columns is the most granular level column (sounds redundant – in this case it’s a Date column). I used Excel to quickly generate formulas, such as this for Q1.  It’s really easy to generate these formulas below. I hope it’s pretty self-explaining – you add things up in a granular level – this way you can combine things – that you wouldn’t be able to combine otherwise:

The same logic works for Q2,3,4. For individual dates, it would be the same idea: 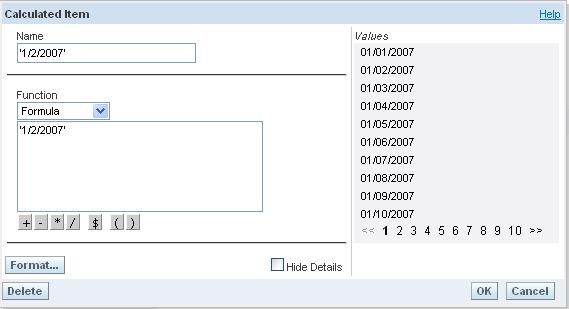 And for months, it’s the same logic: 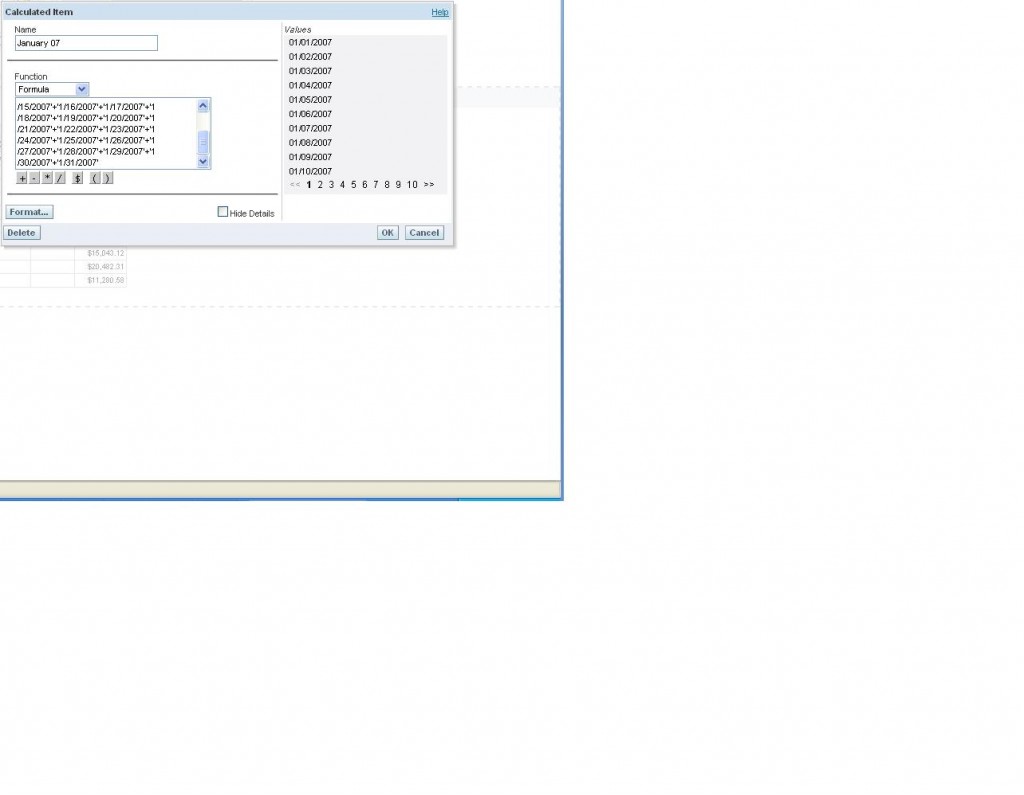 To sum up  – by using the “calculated item” feature of pivot table view – you can create reports with mixed granularity on them. The pros are that you’ll be able to support legacy views (in some instances it’s absolutely critical to mimic existing view). The cons are that it involves some manual entry / data manipulation and that it’s not very flexible (I couldn’t find out how to use variables in this example).

Last thing – it seems as first column gets added on the left and the consequent ones to the right – keep this in mind while designing this view – since I’ve noticed you can’t really manipulate with the locations of the calculated columns.

One thing that’s making the serious IT consulting field less desirable for a lot of people is the constant need for learning new things. Learning by reading blogs, studying new documentation, and constantly experimenting with new features. nQuire / Siebel Analytics / OBIEE has evolved into a very complex product – and clients often expect one person to be proficient in everything, starting from ETL and ending with BI Publisher. I know several people who’re indeed masters in all products, and they could probably complete a BI project single-handedly (from planning to execution, from ETL specs to data modelling, from OBIEE repository design to front-end customizations). However, such knowledge doesn’t come for free. These people put a lot of extra time into learning new things as well as polishing their existing ones. In the end, it pays off, because they can commend higher rates and it’s what they love – it’s something they can be passionate about.

I haven’t written much lately for several reasons – the major one – dealing with the new project, getting into loop of things. Second one, I’m having much fun reading some new blogs (to which I will definitely link once I find some time). Third, it has something to do with being in New York in the fall. It’s a magnificent city, but it’s very demanding – sometimes I feel it’s taking all my energy. Last reason, it’s more and more difficult to come up with new posts.

Have a good week-end! Stay well! (don’t catch a cold like I did)